Bumped is controversial. I was worried that it would be crass. The premise is that a virus causes humanity to lose fertility after age 18. Sixteen and Pregnant, in other words. Teenagers are selling babies, both as amateurs and as pros – paid up front. Melody is one of a set of twins, and she is set up for a very expensive pro contract, but she hasn’t been paired yet. Harmony, her sister, was raised separately in a very religious community and doesn’t believe in sex before marriage.

The first few chapters were a bit of a jolt. The slang was confusing, Melody and Harmony were very difficult to tell apart, but the world was fully formed and I just needed time to settle in. Once I understood the world I was sucked in. It wasn’t girly and silly or too R-rated and sexified. 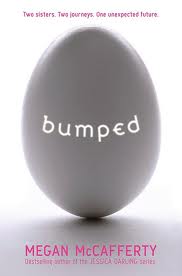 The ending. My normal pet peeve. It closed somewhat, but was so open-ended. When are YA writers going to stop writing books like they are just a way to sell a series and make more money? Writing is an art, books are complete stories. The art of finishing a story but making me fall in love with your writing so that I will read more of your books is your goal.

Have you read this one? What did you think? Controversial or normal YA?