Her Daughter’s Eyes by Jessica Barksdale Inclan is the story of a secret. Two sisters share that secret, until they can’t hide it anymore. Then it becomes both the thorn in their side and the glue that holds their life together. One of them is pregnant at 17. 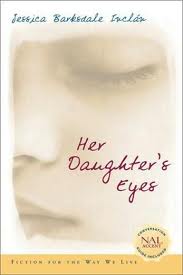 The literary aspects of the story and writing are simple, hidden, and shocking. Tiny little moments that seem insignificant become huge forerunners for revelations later on. In the beginning I felt that the sisters were only 14, maybe younger. Their situation seemed that much more terrible. I’m wondering if that was intentional.

There was a lot of build up for the secret to come out. There’s more than the pregnancy, and the book makes you feel it is one way, then another, and then finally it is revealed. I loved that it wasn’t the pregnancy that was the big secret, although it was a minor one, but that something else was occupying the thoughts of the characters.

I have not read a young adult novel that felt this emotionally involved, real, and literary in a while. I truly enjoyed it.