Little Sacrifices by Jamie Scott is an historical novel about the American South just after World War II. But it’s also about a young woman dealing with life and its curve balls. 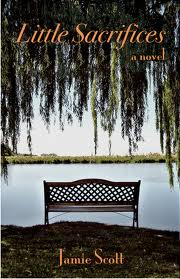 I was instantly drawn in to the story. So much so that I’d forgotten I was reading and wasn’t sitting in a hot car under the Savannah, Georgia sun myself. The characters are interesting and the history was well-integrated. The dialogue was a little hard to follow at times because the characters all seem to have the same dialect and there weren’t always tags in long conversation.

The voice was authentically teen. Her feelings rang true with me. But for some reason I wasn’t emtionally drawn in. Nothing was plucking my heart strings. I think it’s because there wasn’t a unified story. There were multiple climaxes and story arcs that followed a similar theme but didn’t mesh well together.

This is a book I couldn’t put down, and I definitely recommend it.


I received this book from the author for review.