Story of a Girl by Sara Zarr – Book Review

Story of a Girl by Sara Zarr seems like one of those cliche teen sex stories, but it so is not. Deanna is caught having sex at 13…by her father. It changes her future in ways she didn’t imagine. But she comes to realize that the future is her choice.

The beginning did seem a tad cliche to me. Deanna describes imagining a story while Tommy does what he does to her in the backseat of a car. Probably a normal reaction for a teenage girl, but typical. Then I kept reading. The cliche beginning was only to show that the character was a normal teenager, but she has an seamless character arc that grows into a strong, independent yet thoughtful young woman. 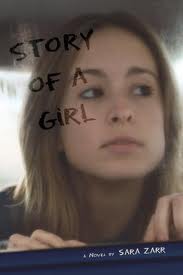 Deanna is clever in a natural subtle way. Not like some young adult books where the teenagers banter like well-read, sweater vest-wearing Oxford students.There were times where she didn’t know what to say. There were times when she didn’t want to open her mouth even though she should have. It was all so real.

Sara Zarr has the ability to make me feel like I am the character. There were times where my palms were sweating and I wanted to tear my hair out. Emotions flooded me. I truly enjoyed this book.