The Persecution of Mildred Dunlap by Paulette Mahurin – Book Review

The Persecution of Mildred Dunlap by Paulette Mahurin is about two women who love each other. Yep, I just came out and said it. But it’s also about loyalty and friendship and gossip and prejudice. A historical novel based in the old west of Nevada, a small town learns of Oscar Wilde’s imprisonment for gross indecency and blazes with fury. 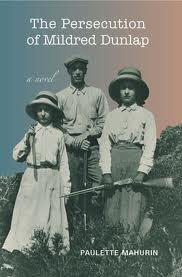 First off, I could not put this book down. It’s a simple story with a lot of depth and background. The exposition of the history is welcome, I hungered for more with each piece that was revealed. Sometimes, though, the internal feelings of the characters were too much. The integration and telling of the history was perfect.

I wasn’t sure what to think of the subject. I wasn’t incensed either way. Probably because it is told from the perspective of the victim. There were prejudice comparisons to black people and Jews as well as gays, but the comparisons weren’t that obvious they were just a part of that time. It felt natural. It never felt like the author’s statement but the character’s circumstances.

The story covered the idea that our past affects who we are. The way we grew up is a large part of what we do as adults.

The climax was a very unexpected twist. But it flowed so well and made the story that much more of a story and not a rant about prejudice that it made me love the book even more. I was worried about blogging about this book – it’s not my norm – but I really enjoyed it.