Albert had a dream of owning a European Porsche, since we were moving here. Porsche is from Stuttgart, where we live, and they are beautiful. He thoroughly researched which Porsche to get and decided on a 924. When we got here he found a few of them, and one specifically that looked in good condition and was a good price.

He called the dealer, who refused to even try to speak English, and found out that he would be at the lot on Saturday until two. Kassel is four hours away, so we headed out early. It’s an awful drive, not flat or straight in any way. It’s pretty, but it takes forever. We got to the lot at one, but no one was there. A few Germans stopped by the lot to look at other cars and were confused why there was no one there. We called the dealer multiple times and finally got a hold of him. Again, he refused to even try to talk to us. With very primitive German we tried to tell him that we had cash and were at the Porsche, but he basically sat silent. Luckily, the Porsche itself was not in the best shape, so I’m glad we didn’t buy it. But we did spend all day Saturday driving, it was not fun at all.

In contrast, we found another Porsche that looked beautiful and was a reasonable price. It was a private owner, not a dealer. Albert called him, again no English, but he was very willing to try. We set up a meeting to see the Porsche the next day. So, Albert took off the afternoon and we drove three hours to Koln. When we got there, the owner said his friend who spoke English was coming to talk to us. He invited us into his home to wait, and offered us a seat and even coffee if we wanted it. When his friend got there we hopped in our car and went to the garage the car was stored at. This car was beyond gorgeous. They showed us everything, told us what had been updated, and let us drive it. If the other Porsche was a two on a scale of one-ten, this one was a twelve. Original red paint, original rims, updated everything that needs to be, a stereo, leather seats, and a beautiful engine. Albert pulled out his wallet and asked where to sign.

To add to the fact that they were so nice, we weren’t sure how we would be able to drive it home. If the polizei stopped us without plates, it might be bad. But they were prepared and had purchased earlier that day a twenty-four hour registry tag that we could drive home with. And gave us the current plates to use. They went through all the paperwork with us, and explained it in full. We could not have found better people.

I kept waiting for the catch. There wasn’t one. And now, for the pictures. Here is our beautiful new (1987) 924S Porsche. Do you like it? 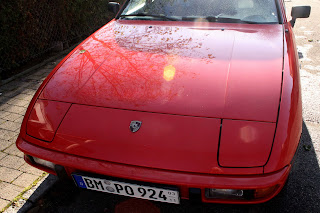 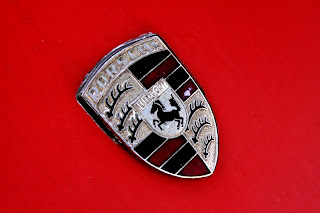 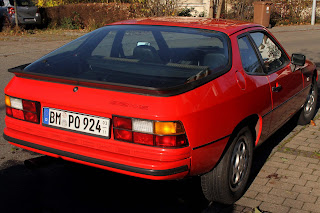