A Story of the West by Susan Spence – Book Review

A Story of the West by Susan Spence is an historical novel about a cowboy and his lady. Matt Daly is a cattle rancher in Montana. Lavina Lavold is a shopkeepers daughter who moves to Montana from big city life on the east coast. They fall in love.

The story was absolutely enthralling for me. I could not put this book down. When I had to, my mind was preoccupied with it while I cooked dinner, worked, did basically anything else. Susan weaves history into the story (sometimes with too much instruction) but still in a well-researched and comfortable way. 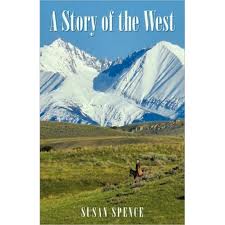 The life of cowboys in the 1800s was hard. But the twists and turns Susan introduces in her book were actually unexpected. There were moments when my mouth dropped open. She had foreshadowed well, but I was too lost in the story to catch it until after the fact. Susan also has great capability in introducing flashbacks. They are hard to incorporate smoothly, but I really enjoyed the travels back into memory. And the fight scenes were simply beautiful – intense, gripping, well paced.

I was a little thrown off by the history lessons. Then I realized how much the book really was about the history. It almost became one of the characters itself. I think the facts could have been shown better as part of the story instead of little snippets of information outside of what was happening, but I enjoyed it nonetheless.