My Cinderella story is ready! Here is the first half, the rest to be posted later this week. 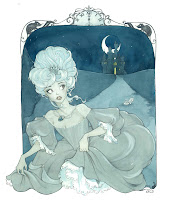 Cinderella by ~Maryanneleslie on deviantART

In the dark night only the tip of her cigarette was visible. With every pull it brightened with an electric orange. Then through the dim light she saw a girl running. She ducked between the RVs, campers, mobile homes, and every pink flamingo in between. Her white skin and yellow hair flashed like neon lights in the darkness.
“Ella?” Marjorie called.
“Shhh!” the girl cried. She flipped over the makeshift, plastic fence in front of Marjorie’s trailer. “Aunt Marjorie, don’t let them know I’m here.”
“Why are you here?”
“Because that witch is being cruel. She’s always cruel. And her daughters just make it worse. I needed a break.”
“So you come to me.”
“Well, you are my aunt, aren’t you?”
“Yes.” Marjorie stubbed out her cigarette and looked Ella over. Her rags were more rags now than ever and her face was streaked with dirt. She had the blossoming body of a young woman, and the face of an angel covered in soot.
“You need to brush your hair. Come on in.”
Ella followed her aunt inside and sat down before the flannel-covered couch to be pampered. After the tangles were gone and her hair shone like gold, she fell asleep with her head tilted back, mouth open. Marjorie turned on the TV and let the blue glare wash over them.
In the morning Ella woke with a start. She ran back to her own trailer, hoping her stepmother hadn’t noticed her absence. She raced into the kitchen and started the breakfast. In her father’s shaving mirror, hung inside a cabinet that Hadley never dared open in case there were rats inside nibbling on the crackers, Ella saw her shiny hair and tried to muss it enough so Hadley wouldn’t punish her. She wasn’t supposed to leave their trailer, especially if Hadley was asleep.
Hadley and her daughters, Jessica and Jennifer, stumbled into the kitchen with their hair in curlers and cigarettes dangling from their lips.
“Good morning,” Ella said. She set plates and mugs before them and then went to clean their rooms.
“Ella!” Hadley screeched.
“Yes?” she stopped in the hallway.
“We’re going to the club tonight for a birthday party.” Her stepsisters went to a private school with debutantes and yacht owners. Ella was convinced Hadley was doing inappropriate things with the headmaster to afford the tuition. “We need the dresses on my bed cleaned and fancied. And I need you to go buy some make-up at the 7-Eleven.”
“Ok.”
“Along with your other chores,” Hadley said.
“Ok.”
Jessica and Jennifer spent the afternoon with masks on their faces, painting each other’s toenails. They sent Ella here and there, getting things – another color eye shadow from the store, their brushes from the bathroom, a soda from down the road at the bus stop, a movie from the rental store. They made her wax their legs and then slapped her when it hurt. She helped them put on their dresses, curled their hair, and smoothed in their bronzer and blush.
When they finally left in a limo borrowed from one of the other trailer park residents, Ella felt like her back was going to break and her fingers would bleed. Instead of finishing what she had left to do, she went to Marjorie.
Marjorie took one look at her face and dabbed at the tears with the corner of her floral Muumuu. She put her arm around Ella’s shoulder and led her inside.
“What now?” she asked, popping open a can of soda.
“They went to a dance at the country club. I’ve been running around all day. I’m just tired. Can I sleep?”
“They went to a dance?”
“Yep.”
“Well, then you should go too.”
“What?” Ella sat up from her almost-asleep position on the broken recliner.
“Why not?”
“Let’s see,” she counted off on her fingers, “I don’t have a dress, I wasn’t invited, I look terrible, they would kill me when I got there. What else?”
“They won’t even know you’re there. Come with me.”
She tugged on Ella’s arm and got her to stand. She led her over the shag carpet and past the laminate wood walls to a room in the back Ella had never seen. Inside were closets upon closets built from PVC pipe and shower curtains. Marjorie threw one open and sparkles and glitter and pretty things came tumbling out.
“What is all this?”
“I used to be on stage.”
Ella’s mouth dropped open.
“Oh close your mouth. Not like that. I was in beauty pageants, darlin’.”
Ella ran her fingers over the sequined dresses. They felt stiff and sharp, like the edges of knives, but they shimmered.
“I’ve got tons of make-up too. A little old and maybe crumbly, but it’ll do. Go take a shower, we’ll make you shine.”