Delirium by Lauren Oliver is a testament to what we are as humans. What makes us tick? According to this book, it’s love. And in the future someone figured out how to cure us of love.

Lauren Oliver is extremely perceptive about humanity as whole. A few lines:

“You know you can’t be happy unless you’re unhappy sometimes, right?” (Page 21 Kindle)

“No wonder the regulators decided on the segregation of boys and girls: Otherwise, it would have been a nightmare, this feeling angry and self-conscious and confused and annoyed all the time.” (Page 57 Kindle) 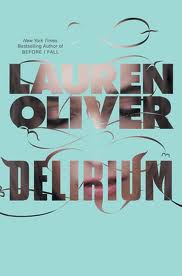 She brings all kinds of things from our world into the mix including blogs (or isn’t that what she’s describing as banned here?):

“…people can’t just write whatever, or post things themselves, or write up false information or ‘inflammatory opinions’…” (Page 93 Kindle)

The characters have traits that make them seem extremely human. Like how Lena, the main character, has gum wrappers and paper clips and random junk in her locker and her backpack. Or when Lena says something that she didn’t consciously realize until it’s coming out of her mouth. I do that all the time.

The change in Lena is gradual. She is gung-ho for being cured. It’s all she’s ever known and it’s safe. But her best friend, and so many other circumstances, make her realize that safe doesn’t mean best.

It ended without ending. I hate open endings. I know it’s a sequel, but I want to be hooked by the writing not by the fact that the story isn’t finished. That was my one and only pet peeve.

Have you read it? What did you think?