I have a guest post today! In my travels back home I stopped in Oklahoma to visit a blogger friend of mine, Hanna from I’ll Name My Typewriter After the Moon. We had a spontaneous writer’s retreat. She explains it way better than I ever could so I will turn it over to her. 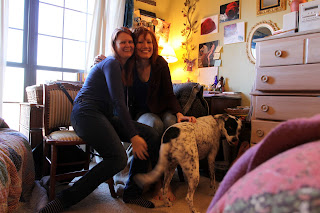 Hanna and Amie at Hanna’s morning writing spot and the crazy Ophelia.

The internet is a strange and wonderful thing. When Amie sent me a brief message on blogger a year and a half ago wondering if I would want to swap writing critiques sometime, I never dreamed that she would eventually be sitting in my living room asking me to write a guest post on her blog. Why? Because I live in Oklahoma, and she lives in Germany, and those two places don’t intersect much.

But such is the mysterious magic of the internet—and the kindred pull of books—that complete strangers can form lasting friendships across great distances. I was thrilled to have Amie come visit this weekend for myriad reasons, but especially because it meant we could at long last sit and talk about books and writing in person. 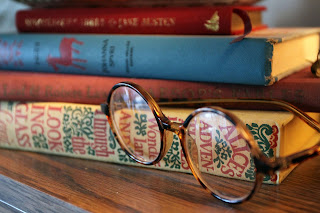 If you are a writer, you know how it is. Your family and most of your closest friends know about your writing—possibly they even venture to ask you about it every so often because they sense how important it is to you—but rarely does someone actually satisfy the secret itch you feel to talk about it… to be understood. Anyone who does not bear the burden of stories (or a similar art) themselves must always struggle to comprehend the strange ache of those who, because it is not an easy thing to understand. Even I am often baffled by the force that pushes me out of bed in the morning and steers me to my computer: why would any sane person give up precious hours of much-needed sleep just to put words on a page?

But other writers do understand. 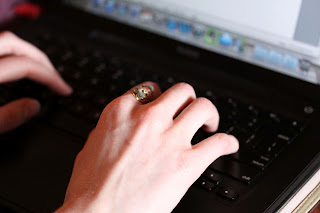 Amie and I answered several “So what are you going to do this weekend?” queries with laughter, because the honest truth was, “We’re going to write and read.” To those who asked, this answer was inconceivable. Amie’s husband Albert said, “You’re going all the way to Oklahoma just to do what you always do?” And though she was—and indeed, we often did just that—there was something about doing those things in the company of another writer that made the ordinary tip-tapping of the keys feel something like a party. And I think I’ve figured out why.

You see, writers are usually quite solitary by nature, and even if they’re not, the act of writing tends to demand solitude. You can’t exactly bring other people along with you into your imagination, after all. And even if you like to be alone, the longsolo journey can take its toll after a time. But when you write alongside someone else who shares your passion for words and stories, it’s almost as though you can, for a short time, have a companion on the adventure; a friend to walk with you along the endless, winding path of your art, and share both your burden and your joy for the brief period you are walking in tandem. The result is both refreshing and reassuring, because it reminds you that you are not alone. That even if you must forge through the underbrush of your own imagination unaided, there are others out there hacking through similar jungles and experiencing the same kinds of successes and failures as you are… and one of them is only as far as the next couch.

And when the alarm goes off after fifteen minutes of word-count sprinting, you can look up at your friend, grin broadly and say, “Swap!” 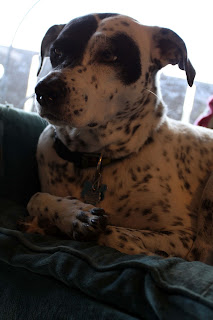 The crazy and awesome Ophelia.