Spoilers below on Mockingjay by Suzanne Collins…just in case you haven’t read it yet.

I’ve now read Mockingjay twice. I think the second time really allowed me to slow down and have a broader view. I always expected Prim to die, even the first time. Of course the person closest to Katniss had to die, and that person was Prim.

The thing I noticed the second time was that Katniss was always going to end up with Peeta. I like Gale better, but that’s because he’s my type. (I also love the ‘friends with a guy as a kid and then fall in love’ story.) But throughout the book Katniss gives little hints as to who she really loves. Gale is referred to as her best friend multiple times; she has more emotional reactions to Peeta; and Gale is exactly like her. All of which I think she realizes even before Prim dies because of Gale’s bomb. 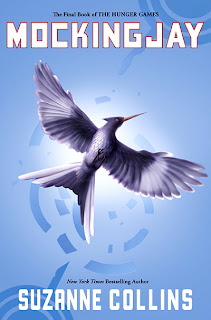 The first time I read it I wrote notes. Here they are:

–  It’s so much more psychological than the other two.
–  When she killed Coin I was like, “Yes! She got the right one!” It kept flipping back and forth to confuse the reader and Katniss, but I never trusted the rebels. When Boggs told her not to trust them it solidified my trust.
–  The dungeons where the prep team was held is an unanswered question. I felt jipped.
–  It seems odd that in all three books Katniss is constantly knocked unconscious but is always safe. She never falls into enemy hands while out. Too perfect.
–  I really wanted her to make it into the mansion and kill Snow. But maybe that cold-blooded killing would have been out of character for her.
–  I wanted her to end up alone instead of with one of the guys. She can survive without either of them.
–  Katniss is such a real character. She reacts correctly, not theatrically. Her reactions are what make the book. The fact that she never stands up for herself is real. Or that the strange relationship and problems never become solved is real.
–  She voted yes because it was her way of saying, “This will never end. Humans are sick and will constantly want power, using pain to get it.” Then she killed Coin to say she could be better than that. Coin, the only other person who knew they had voted yes for another games. Which hopefully never happened because no one knew, right?
–  It would have been so wrong for Katniss to help forge the new world. She never wanted that. She wanted to run away and be left alone.

What did you think of it? Are you excited for the movies?