Night of the Purple Moon by Scott Cramer – Book Review

Night of the Purple Moon by Scott Cramer is a young adult post-apocalyptic science fiction. A comet’s dust turns the sky purple, and space germs kill everyone who is past puberty. The world is left with a few scientists who were quarantined, and thousands of kids. On an island off of Maine, a group of kids bands together to survive. 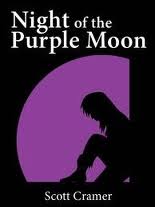 The high stakes and constant motion just kept building throughout the book. I didn’t want to stop. The idea was what really intrigued me, but the personality and writing really hooked me. It’s written in third person so we can bounce from character to character. I liked that, but I also think it could have benefited from being first person for the emotion. Still, a lot of moments had me gripping my seat in anticipation.

The characters are all very solid and real. For the story revolving entirely around children, it didn’t feel childish or silly at any point. A lot of science and knowledge was thrown in because of one nerdy character; hope and love and worry were projected by another. They all had their roles and were connected to each other in simply beautiful ways.

Scott touched a few times on the fact that these thousands of children would one day have to procreate in order to keep the race continuing, but it was never weird or wrong. There were still twelve-year-old crushes, not intense love you wouldn’t expect from pre-teens, and every once in a while someone would mention it but they would just continue on as if it wasn’t said.

The beginning of the book threw me a little. The timing seemed strange, but once I got into the flow of the writing and the comet dust fell into the atmosphere, curling its way around the moon, I couldn’t stop.