The Future of Us by Jay Asher and Carolyn Mackler is about knowing what will come and how Emma and Josh react to that knowledge. In 1996 they sign onto AOL and are prompted to log in again, but what they log in to is Facebook, fifteen years in the future. There’s some sort of time warp and Emma’s Facebook login is still the same. Emma takes the information and tries to change her future – the butterfly effect. Josh just wants to flow with the current and let his future happen as it is.
The first few chapters are a little overwhelming with the constant mention of Dave Matthews, Toy Story, AOL, and all the other 1996-ish things. I felt like a mole getting wacked over the head. 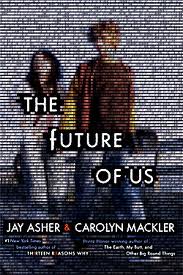 I found Emma to be a shallow character. But I also found that she had the most growth. She had a true catharsis by the end where Josh had a slight realization. The premise is amazing, and I think the authors did a great job of making it seem normal. There was nothing too drastic; that I love. They didn’t bring science into it because the idea was too unexplainable so they left it as a phenomenon and let the characters make the story. Their voices were very distinct and recognizable. Granted, it’s two different authors, but still, the flow of the story and the flipping of characters each chapter was smooth and unhindering.
The ending, oh the ending; it was simple, natural, easy, and wonderful. There was no big bang or open ending. It simply ended.