When She Woke by Hillary Jordan – Book Review

When She Woke by Hillary Jordan is a science fiction remake of The Scarlet Letter by Nathaniel Hawthorne. Can I just say that I hope high schools start moving on to newer syllabi and teach things like this. Hannah Payne, the main character, had an abortion and was accused of murder. The punishment is to infect her with a virus that turns her skin red, so everyone she sees knows what she is.

The first chapter was absolutely superb. Intense, gripping, it sucked me in to the moment and wouldn’t let go. Throughout the book I had a lot of emotional response to the characters. A lot of them really pissed me off, but that’s a good thing because it meant I was impassioned and wanted to keep reading. 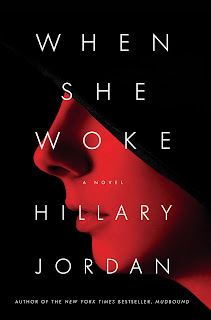 Hannah had such a visible and strong character arc. She went from timid, perfect Godly daughter to strong, independent, knowing-what-she-wants adult. I think she even found the happy medium of still believing in God but not blindly following people who think they knew what she needed.

The ending was a little too romancy and anticlimactic for me. It ended too easily when there were so many possibilities for more conflict.

I would definitely recommend this book, but beware that it does get rather religious. It’s not that the book is telling the reader to become religious, but it is a touchy subject and I’m sure some people would not enjoy it.