I know you’ll all look at that title and say, “You’re doing what in Germany!” But the fact is. I’m not a tourist here, I live here now. Plus Albert is at work all day. So I’m doing what I would be doing in Colorado. I’m cooking, cleaning, taking photos, and reading. But so far it’s been an odd experience. I didn’t think it would be any different than doing it in the states. But with this book it’s been shocking. I’ve read a lot of World War II books in my time. Ranging topics from an American pilot crashing in France, to a holocaust survivor, to a woman who was a Nazi guard. This one, well let’s just say it hit me hard. 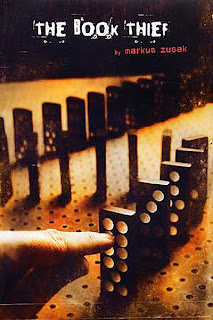 It’s about a little girl in Nazi Germany who is illiterate. The narrator, Death. That alone is one for the record books, and he really makes you kind of pity Death. Death has a horrible job, and that’s all it is. But Death is fascinated by humans and their stories. This is the first Holocaust story I’ve read that doesn’t feel like a Holocaust story. We go through the years of the war with this girl, but we see her struggles. Her foster father teaches her to read. She makes friends. They hide a Jew in their basement for a while. They sit through air raids with her reading aloud to calm everyone. She steals books.

It’s depicted from the German side. Of course it never condones what Hitler did, in fact her foster family goes against him. But it’s not overtly Holocaust. It really focuses on Leisel and her daily life. It is written really well, and truly sucks you in.

The weirdest thing for me…reading a Holocaust book in Germany. I’ve never been to this country before. And I never thought this would effect me. But as I read through this book I started to think, “That happened here. I’m on that ground.” It was very unsettling.

And yet, I went for a walk this afternoon through the farm fields. The countryside is absolutely gorgeous (pictures coming soon). I grew up in a country that hadn’t seen war in a very long time. I grew up in a state that has never seen war, maybe a few skirmishes but nothing to the scale of World War II. This is a whole new experience for me, and even though it scares me a little bit, I’m going to embrace it.